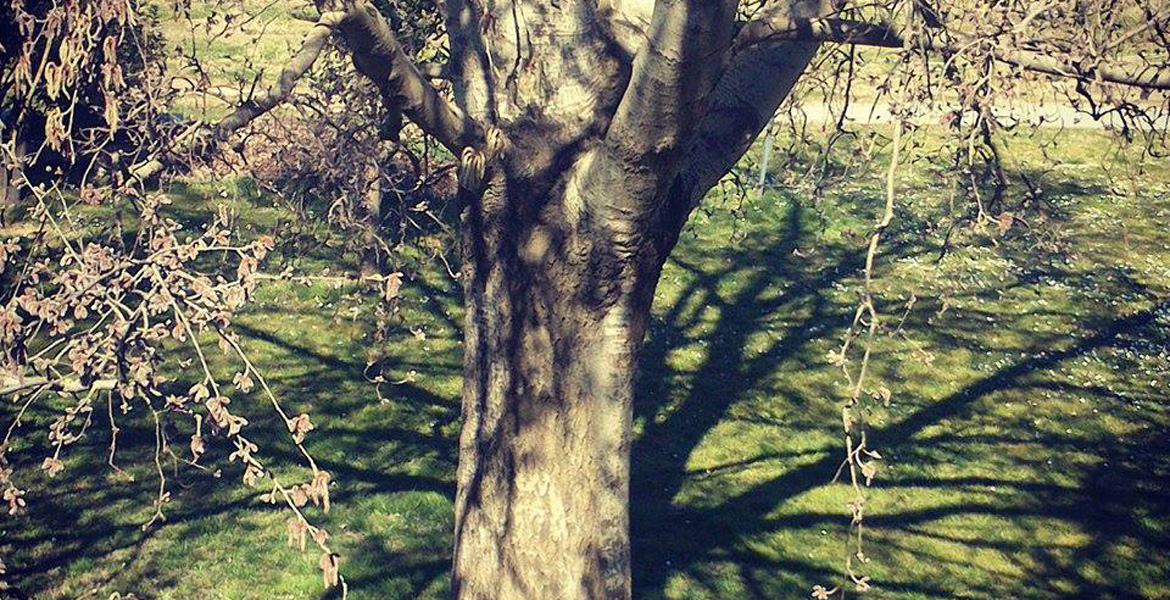 In Roman times a popular tourist resort – long considered the garden of Venice – the island of S.Erasmo, with its 750 inhabitants, is a traditional producer of fruit and vegetables.

At the centre of the Northern Lagoon, between Punta Sabbioni (Cavallino), Lido, Murano and Burano, suspended between sea and sky, Sant’Erasmo in its leafy isolation offers pathways to nature (by bikes or on foot) to the lagoon (by boat and kayak), to Venice, or to the sea. A magical beach just a stones throw away in the middle of the sea, reminescent of a forgotten time.

One day for discovering islets in the north lagoon, that still to this day supply a great deal of city markets. From Vignole to Sant’Erasmo, the “vegetable gardens of Serenissima” on Lazzaretto Nuovo which offers its visitors considerable hints of naturalistic and landscape interest. 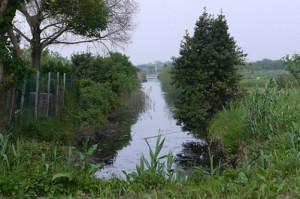 Starting from the wharf of Fondamente Nove, in the northern part of the Venetian historic centre take Line 13 – from Venice Fondamente Nove for Vignole, Sant’Erasmo,Treporti . The first stop is Vignole, the island “of seven vineyards”, first part of our itinerary on the discovery of “vegetable gardens of Serenissima”. The island of Vignole welcomes us with its luxuriant vegetation of elms, poplars and mulberry trees that sprout from the hedges and weeding brambles behind which there are hidden alternately the vegetable gardens and vineyards that have given fame to this island. The only human presence and a reference point, once you have got off the waterbus, seems to be that tavern of the wharf, similar to many others that we come across each time we land on one of these islets disperse in the lagoon. We advise that you stop on this island for a day’s outing on the discovery of what has remained of the ancient church of S. Erosia or of the military defensive works still present opposite Sant’Erasmo, the testimonies of the defensive function of the island during the times of Serenissima. Returning from the walk, we suggest that you stop to enjoy spectacular sunsets in the background of the lagoon and Venice. 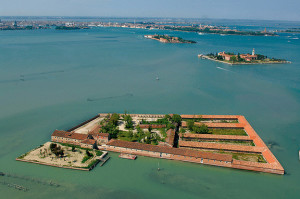 Retaking the waterbus, we enter the canal that separates the island of Sant’Erasmo from Lazzaretto Nuovo. We suggest that you get off at ACTV stop of Lazzaretto Nuovo and have a stopover on this island to enjoy a panoramic walk along the island’s walls that continue for about one kilometre of the island, offering points of noteworthy naturalistic interest and a 360 degrees view onto the lagoon opposite Venice. If you then want to linger in this dozing atmosphere, we suggest to take the pathway and advance towards groves of bay, ash, hawthorn, wild blackthorn, and marsh cane. When you arrive to the ghebo (small canal) which separates the north side of the island, you could observe typical fish and shellfish of the lagoon and a great variety of sandbank plants, amongst which the limonium and salicornia. Within the walls, you can continue your walk along the lanes bordered by centuries-old mulberry trees and go around real curb-wells, surrounded by ash trees and poplars. It is not rare to see seagulls, little egrets, herons and sea crows pass by or an exemplar of kingfishers, marsh harriers and night birds of prey that frequent the neighbouring areas. In summer time it might also be possible to observe a colony of stilt birds, on the increase in the last years. It is possible to join guided tours. 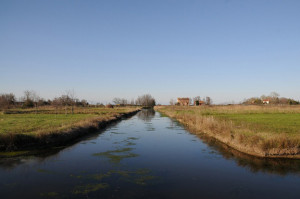 Returning to the wharf, take the waterbus again in direction of Sant’Erasmo Treporti and get off at Sant’Erasmo, the biggest island in the lagoon, considered the historic “vegetable garden of Serenissima”. You are particularly hit by S. Erasmo’s rustic aspect and the silence that surround vegetable cultivations, (amongst which the famous purple artichoke of Sant’Erasmo) Vineyards and orchards, interrupted only by woods and canals, by some ancient fishpond or by some isolated lodge, immersed in a rarefied atmosphere and almost pending in time that seems to have forgotten to switch off the noisy engine of “development”. We suggest one unusual walk, therefore, on the border island that the nature itself had transformed from a noble shore to a small island, from place of summer holidays for patricians reversing to “countryside of Venice”. A journey to be done on foot or by bicycle, (to rent a bicycle contact the Hotel Lato azzurro) solitary and almost abandoned by man, if we exclude the bathers and the fishermen of genuine clams that can be here in the summer months, this is an itinerary which will draw you away from crowds, from the confusion of sounds and colours and from the austere majesty of other islands in the north lagoon. Starting from the boat stop of Sant’Erasmo-Capannone, take road the turn rigth, that goes around the island. The journey is about 10 kilometres long (8km are on asphalt road and remaining 2 km on white path or dirt road) and the journey time is about 3 hours, excluding breaks.

Crossing the agricultural landscape of S. Erasmo, you’ll arrive up to the Maximilian Tower, a massive Habsburg fortress that has been recently restored and from which you can enjoy an excellent observation point of the lagoon and the beach below. After having recovered your strength with the fresh sea air that you breath here, turn left and go along the sandy strip of the eastern side of the island that was once upon a time a maritime front of the north lagoon and, continuing along the footpath, you’ll arrive to Seca del Bacàn: the ancient beach is today a system of sandbanks and velme (sandy and muddy terrains) in construction phase and an important transit point of migratory currents of limicolous birds (sandpipers, ruffs, squids etc). At this point, if you don’t want to arrive up to the north-eastern end, the wildest part of the island, we suggest that you take one of the straight roads on your left which go back towards the small and modest built-up area from where you could take a waterbus to take you back to Venice. Until the decline of the Republic of Venice, the lagoon was defended by a few strategically placed forts to control the port mouths, such as “Due Castelli” between S. Nicolò on the Lido and the Island of S. Andrea, which were fortified by the architect Sanmichieli, while there was virtually no form of defence for the land joining the lagoon to the mainland, except for the Mestre Castle, that had declared their devotion to the city from the XIV century onwards. After the fall of the Republic in 1797, militarisation began in the Lagoon by the French and Austrian-Hungarian authorities, and the fortified harbours were built in detached forts with military command and barracks located in the convents that the city had suppressed and on all the islands in the lagoon. In 1945 there were almost one hundred garrisoned forts. In this “modern” phase after 1797, as the entire defence system was constantly and progressively strengthened, the coastline of Saint Erasmus was also fortified, which is when the Massimiliano Tower was built by the Austrians between 1843-1844. They built it on the remains of a previous fort the French had built during their occupation between 1811-1814. The fort is circular in shape with an indoor area of 600 square meters, an external diameter of approx.18.50 linear meters and an internal diameter of 8.50 linear meters and a height from the ground of 11 linear meters, while certain outbuildings, such as the cistern, arms store and certain artillery stations were built on the outside between the canal and the bordering landfills. The entrance foyer leads to the central, circular cloister where there are fifteen cells built on two floors of about 40 square meters each, with an access corridor running around them. The fort takes its name from its inventor, Archduke Massimiliano Giuseppe of Austria-Este (1782-1863), who was born in Milan and was the third child of the Governor of Lombardy and Duke of Modena (1803-1806) Archduke Ferdinand. This passage should perhaps be explained, because legend holds that another archduke had been in the tower in the past, Massimiliano I, Emperor of Mexico. This particular Massimiliano, second son of Archduke Francesco Carlo of Austria and brother of Francesco Giuseppe, the future Emperor of Austria, was born in Schönbrunn on 6th July 1832 and was shot and killed in Mexico on 19th June 1867. Massimiliano I had been Viceroy of Lombard-Veneto since February 1857 when he took over from Field Marshall Radetsky, and his story is very interesting and is entwined not only with the European political tension of that time but also the colonial events in the Americas, with the American Civil War and the riotous revolutionary governments in Mexico.However the “Italian” Massimiliano who designed the tower retreated there in 1848 during one of the most strained periods of the Italian Risorgimento wars. The idea of giving the tower a circular shape came about because it meant that the artillery that resided there could be used at 360° and was based on studies by the Este Noble Military Academy in Modena. The results of these studies were applied to the entrenched field in Linz, and another entrenched field built by the Austrians in Brescello, on the Po River. Four of these towers were built here between 1834 and 1836 but were then demolished after Italian Unity came about. This means that the only remaining example of a Massimiliano Tower is this one in Venice. The tower had long since been abandoned and the landfill was used to house hens, rabbits and other domestic animals, but it has now undergone a magnificent restoration by the New Venice Consortium as part of the Programme Agreement between the Venice Town Council, the Veneto Regional Council and the Venice Water Authorities, and was returned to Venice in 2004. The restoration fully respects the architectural layout that had been taken from the document archives, but modernised with the inclusion of totally removable structures that enable an everyday use as a gallery. ally removable structures that enable an everyday use as a gallery. 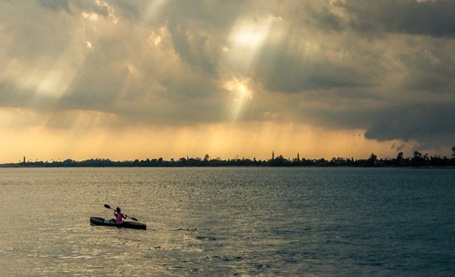 Here you can take part in recreational, sport, or cultural activities. For adults and school children, we offer workshops and excursions on environmental education. There are many bicycles available for rent and they are for free for our guests. Rates are 5 euro per bike for the first 2 hours and 1 euro for extra hours. 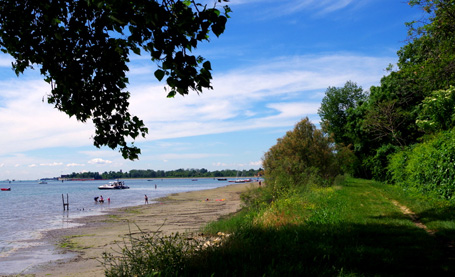 The beach stretches of Bacan island of St. Erasmus, within the Venetian lagoon northern and can be reached only by boat or boat.

Off the vaporetto stop „Shed“, you will have to walk the southwest side of the island for its entire length, to move from the southern tip (about 1 km).

The Massimiliano tower overlooking the ancient beach of Bacan, where the Venetians, boat, go for tradition to bathe in their summer picnics. The thin strip of sand stretches for several hundred meters along the northeastern shore. The clear water of the sea-lagoon provides cool even lying on the soft sand of the shore.